Some blood-tinged droplets sneezed on the floor might be the only sign or there might be a steady inexorable bloody drip from one or both nostrils. These findings are alarming as well as messy in the home and we want to identify the cause and take care of it promptly if it is possible to do so. The problem is that there are many causes and not all of them are localized to the nose and many are very serious diseases. The following is a review of tests typically necessary to get to the bottom of the bloody nose as well as the conditions that might be responsible.

So, you are at home with your pet and a bloody nose starts and does not seem to be stopping. Here are some tips to get the bleeding controlled in the time prior to your vet appointment:

If these steps do not stop the bleeding or the pet is having difficulty breathing, go to your vet's office or local emergency clinic at once.

Don't forget that a pet with a bloody nose will likely swallow a great deal of the draining blood. This may lead to an especially black stool or even vomit with blood clots in it.

After a bloody nose, such findings are usually just a reflection of the bloody nose and do not necessarily indicate bleeding in the GI tract.

Information Your Veterinarian Will Need

You can help your veterinarian tremendously by taking some time to think about the following information and bringing up anything pertinent.

After the veterinarian performs a general examination of your pet, some more specific tests are needed with the idea of prioritizing the most likely conditions and least invasive forms of testing.

A basic blood panel and urinalysis will probably be needed as a database for the animal’s health as well as to assess the degree of blood loss. This information also serves as a pre-anesthetic evaluation should rhinoscopy or nasal imaging become necessary. A platelet (a blood cell involved in blood clotting) count will be needed as will coagulation tests (common tests are the PT or prothrombin time; the PTT or partial thromboplastin time; the ACT or activated clotting time; and the buccal bleeding or symplate time.) These tests evaluate a complicated biochemical cascade responsible for clotting blood. The pattern of abnormalities found in these tests will sort out blood clotting disorders.

Other blood tests that may be helpful involve titers for fungal infections, a classic cause of the nosebleed. Fungi are inhaled and if the patient is immune-compromised or excessively exposed, the fungus can take root and begin to grow in the nasal cavity.

In cats, the most common nasal fungal infection is caused by Cryptococcus neoformans. The good news here is that a blood test for fungal antigen is very accurate. Any positive number is significant and warrants treatment.

Blastomyces dermatitidis is another fungus that can get into a dog's nose. Urine antigen testing is accurate for diagnosis and blood testing is also available if results are ambiguous. As with other fungi, treatment is long term and challenging.

Another condition worth mentioning is hyperviscosity syndrome. In this situation, an extremely high blood protein level makes the blood so thick that blood vessels break from the pressure. Certain types of cancer (multiple myeloma, lymphoma, and certain types of leukemia) as well as infection with Ehrlichia canis, a blood parasite can cause this syndrome.

Another relatively simple parameter to measure is blood pressure. High blood pressure can occur as a complication of numerous diseases. When blood pressure rises, small blood vessels begin to burst and bleed, not just in the nose but often in the eyes or nervous system as well. Do not be surprised if your veterinarian checks for retinal hemorrhage.

Tick-borne infections (Ehrlichia, Babesia, and others) commonly involve low platelet counts. Platelets are blood cells involved in clotting and when they become infected with blood parasites, they do not work properly in the clotting cascade. Tick panels are blood panels that screen for infection with numerous tick-borne parasites, most of which can be managed or eradicated with antibiotics.

If the basic blood tests and clotting parameters are normal, then the chances are that the problem is localized to the nose but there are a few more tests that are required before the patient is anesthetized for a nasal examination. 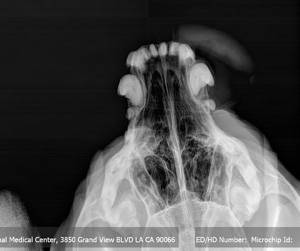 If nothing has been revealed by the preceding tests, it is now time for radiographs of the nose, superficial rhinoscopy, and a dental inspection all of which require general anesthesia. Radiographs generally start the procedure as the other procedures might alter the radiographic appearance of tissues. The radiographs help evaluate the tooth roots and sinuses. Nasal tumors are common causes of nosebleeds in elderly dogs and the bone destruction they cause is evident on radiographs. Referral for more advanced imaging such as CT scanning or MRI, may be needed to determine the extent of bone destruction or to clarify radiography findings.

An otoscope (the same gadget used to look in your pet’s ears) can be used to look inside the nasal cavity superficially to remove foreign bodies lodged there. Deeper peeking requires an actual endoscope which may not be readily available in general practice.

The teeth can be cleaned under anesthesia with specific attention to the tooth roots (remember, an abscessed upper tooth root penetrates into the nasal sinus above.

If it seems appropriate to do so, some nasal discharge can be flushed through the nose and into a gauze sponge packing the throat. This may be helpful in identifying infectious organisms but may initiate more bleeding so some judgment is required on whether the benefit is worth the risk.

If the simple tools of general practice do not reveal adequate information, referral for endoscopy may be needed. Deeper visualization of the nasal tissues is possible with this equipment, plus biopsy specimens can be taken although bleeding is the chief risk. Taking a biopsy is particularly difficult in the nose, not just because of the hemorrhage but because nasal tumors are surrounded by so much inflammation it is difficult to get a representative sample. Often it is not possible to see the area being biopsied directly, especially if prior sampling has led to bleeding.

If radiographs are diagnostic for cancer and aggressive therapy is contemplated, prognosis is highly dependent on the type of tumor so biopsy becomes especially important in this situation.

At the end of all these procedures, sometimes the area of bleeding is simply not accessible without surgery. This would be the final and most invasive procedure in retrieving a difficult foreign body or tissue sample. Extensive bleeding is expected and this is generally the last resort after a long road of diagnostics.

In a study by Bissett et al published in the December 15, 2007, issue of the Journal of the American Veterinary Medical Association, 176 cases of dogs with bloody noses were reviewed to determine which underlying causes were most common. Of these 176 dogs, a definite underlying cause was found in 115 cases.

Conspicuously absent is the nasal fungal infection but since these are frequently regional in nature in dogs, the population studied may not have been in an area where fungi are common pathogens.

Articles
Anchovies For Cats
Read More
Ticks and Fleas Care
Read More
Food To Avoid During The Summer For Dogs
Read More
Subscribe to Our Newsletter!